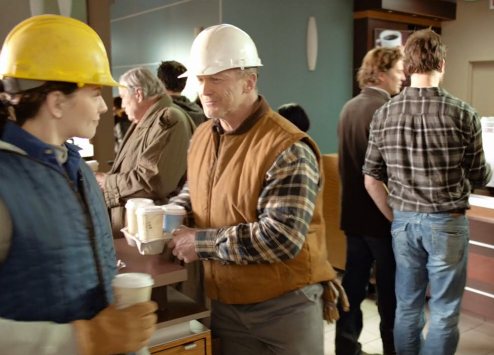 Ever since Apple stunned the world with its legendary 1984 ad in Super Bowl XVIII, the big game has been as much about the epic battles of the advertising big league as about football rivalries.

While we didn’t get in there with all the major brands on the American broadcast, yesterday’s Canadian Super Bowl viewers got a look at our latest work for the Government of Canada.

This campaign, for Finance Canada, encourages Canadian workers and entrepreneurs to take advantage of incentives for education and training, hiring, and equipment upgrades offered by Canada’s Economic Action Plan. Each ad was shot separately in English and French.

Shot just a couple of weeks ago in Montreal by Director Pierre Dalpé at Moskito, these ads use the familiar setting of a coffee shop to show how benefits are accessible to everyday people. A simple but well-executed motion-matching effect allowed us to take the characters from the coffee shop, to the workplace, and back again in mid-conversation. This shows the immediacy and relevance of the benefits.

You can find out more about the programs available at the EAP web site.